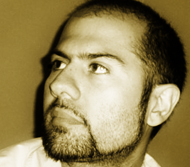 I love photography as a form of art and I think in the real possibility to shoot good photos also handling common cameras, in my opinion the photographer is like a "painter" of our own feelings filtered through camera lenses.

Born in Rome in 1974, he is nephew of award-winning painter, sculptor and restorer Vincenzo Verducci (1909-1995) and son of Professor painter and restorer Angela Verducci (1946-2006); he breathed immediately in his youth an air of modernism and creativity that led him to develop an extrovert and imaginative behaviour. He spent his childhood and adolescence in the city of Ferentino, a city in the countryside near Rome, and this gave him continuos visual inputs due to the nearby agricultural landscapes, developed later into photographic themes focused on nature that is one of the pillars of his portfolio. During this period he already reveals his passion for photography expressed using a Minolta SLR srT100x. After the completion of scientific studies in 1993 there's his "return" on a permanent basis to Rome, the brief experience in the school newspaper that he had in the two previous years, provide him the basics of composition that matured later with the achievement of a European professional certificate of "graphic operator and desktop publishing". These educational experiences added to the years spent in the faculty of Physics at the University "La Sapienza" in Rome provide him with the right balance between technique, composition, color science and new technological frontiers that in conjunction with the already developed artistic leanings will be transformed into a perfect union between technology, science and "art"of photography. In 2004 he bought his first digital SLR, a Nikon D70, and this marked an important step in this artistic path which is still in full evolution in continuous search for innovative techniques and achievements (HDR, high dynamic range, for example). Riccardo Cuppini currently lives and works in Rome and tries to express his passion for photography representing the places of the "eternal city" and suburban neighbors.

Photography takes an instant out of time, altering life by holding it still - Dorothea LAnge (1895-1965)